Since I grew up with my interest in brushwork, I always have the curiosity to interpret the sacred Latin letterforms from an Eastern cultural perspective. The Chinese art of writing not only allows the ink brush being an inspiring tool for the realization of my diploma thesis but also contributes a philosophy about brush techniques and writing rules to question the absolute image of the Latin letters.

Through the transition from handwriting to drawing and to typographically generated letters, the construction of brushstrokes reserves those organic twists or connections from one gesture to another. A typical feature is that the originally curved elements from the classical Latin letterforms now become oval or even angular – following the predominant rules of Chinese writing and imitating the brush movement in gestures.

Ultimately, my current bachelor thesis project outputs with a regular font including Latin basic letters, numbers and symbols. This font is legible to be used for reading of texts, and design in details are even more distinguishable in large type sizes used for display. 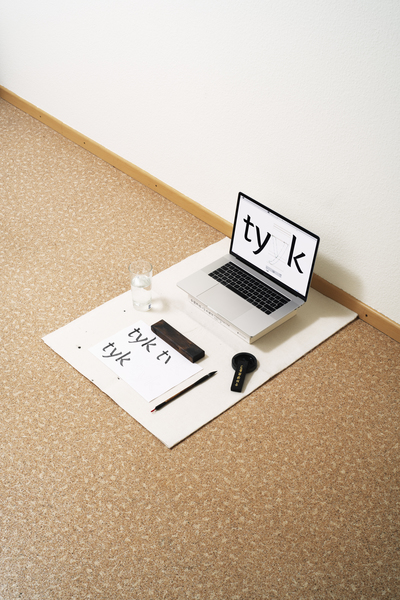