Zeichnen als Erkenntnis [Drawing as Knowledge Acquisition] is the title of a book that has been looming on my bookshelf for quite a while. It is a statement asking for elaboration. Exploring epistemic processes in drawing was bound to yield fragments and, I hope, pieces of a puzzle. It provided an opportunity to draw and become acquainted with (current) research and theory in the field of drawing. The question was how my knowledge about a situation observed and drawn would develop in the course of four months and what specific part drawing would play in this process. I chose Limmatplatz in Zürich to draw – largely for its complexity regarding traffic layout and population.

The research was practice-led; many issues arose along the way and out of drawing. I had set delimitations: I would only draw what was actually in front of my eyes and refrain from completing a drawing in retrospect. I tried not to pass “the point of crisis” coined by John Berger , the moment when you start being more interested in the drawing than in what you are observing, and draw to meet the needs of the drawing while withdrawing your attention from the “reality of the visual world” that Nanne Meyer identified as one of at least three realities a person drawing something has to deal with . Consequently, I was focusing on understanding Limmatplatz (standing for any other reference outside the drawing and the graphic artist) rather than taking it as a mere starting point for chasing novel ideas and images.

One aspect I started to be interested in was that a drawing consists of countless glances and is, in fact, a sediment of the ever-moving environment one studies and, automatically or provoked by the person drawing, shows a synopsis of phenomena and displays or hides patterns and characteristics. Things drawn together may produce knowledge; things drawn apart, too. The pros and cons of familiarization, of becoming acquainted with Limmatplatz as well as with drawing, was another aspect that drew my attention. Once settled in my memory, the notion of Limmatplatz became a source for new and related imagery. On the other hand, falling back on familiar images may lead to a fixation and easily ends up in a repetitive creation of images. To take other egocentric and allocentric perspectives or to change the dispositive of drawing are possible escape routes. There are many more though.

Concluding the project, I should like to stand up for the vastness and diversity of the field of drawing and the contingency of positions taken up within it. The same might be held regarding Limmatplatz. According to Ashwin, drawings are “collocations of marks distributed over a spatial field of reference. […] This definition would also distinguish drawing from immaterial phenomena such as thoughts and ideas” . Drawings are substantial, experiential, sensuous facts – evidence of and a resource for further knowledge acquired by a more in-depth acquaintance. 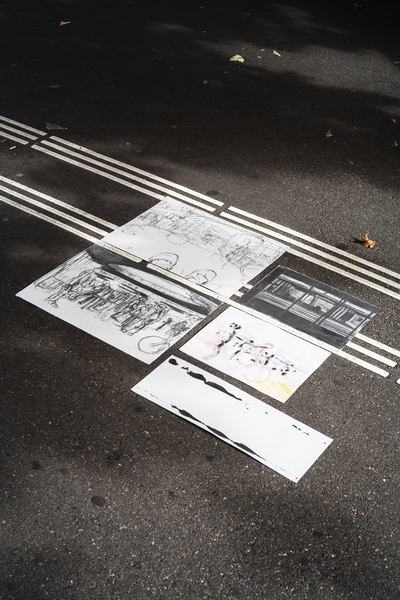 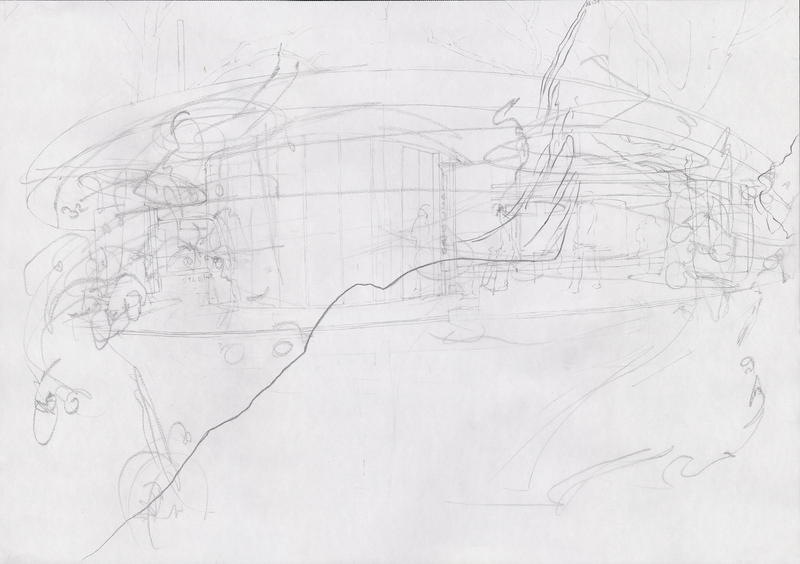 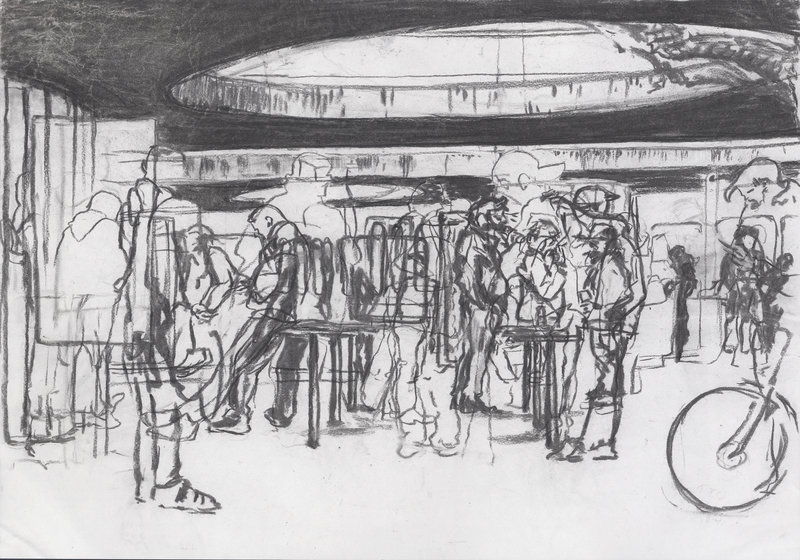 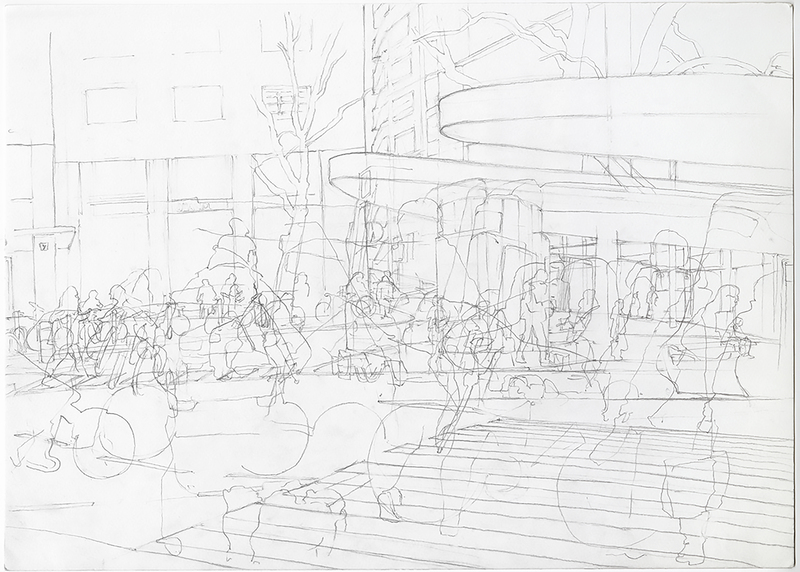 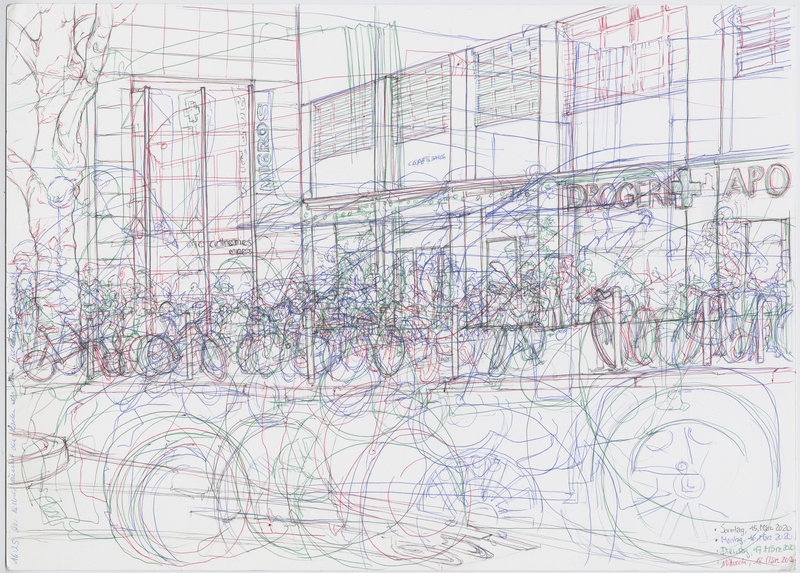 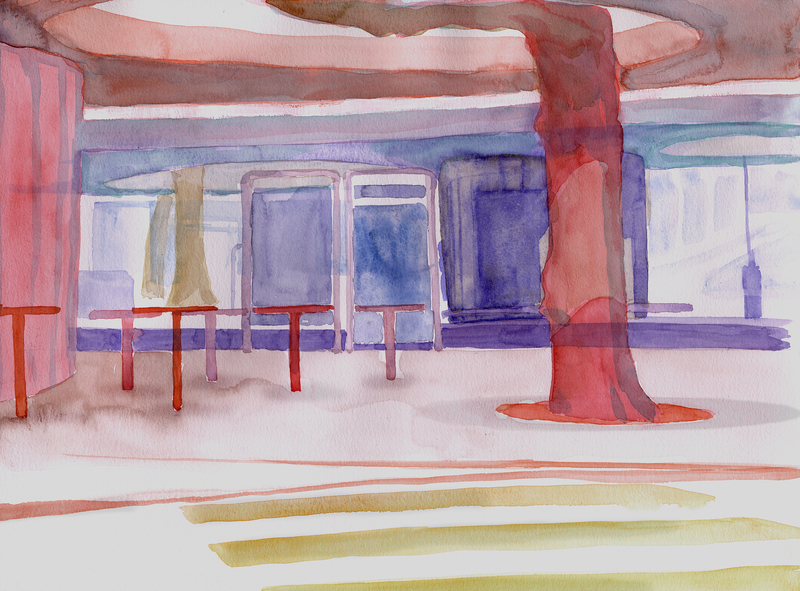 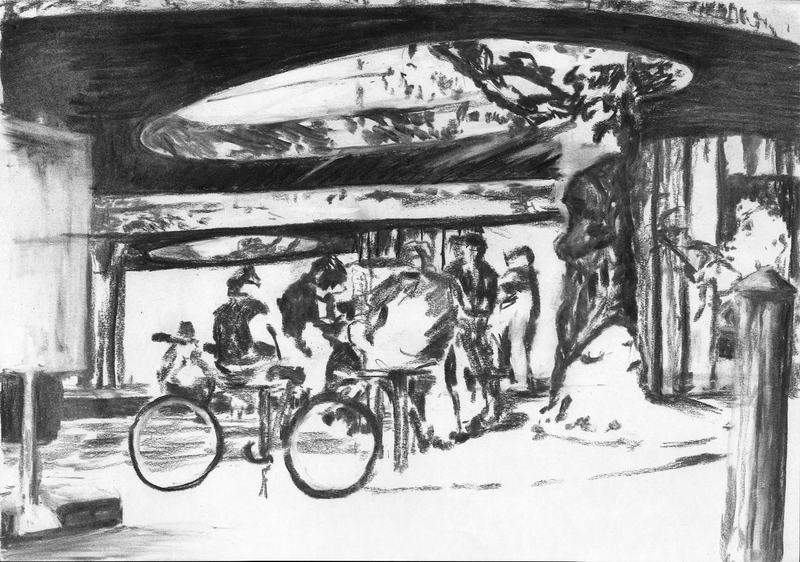 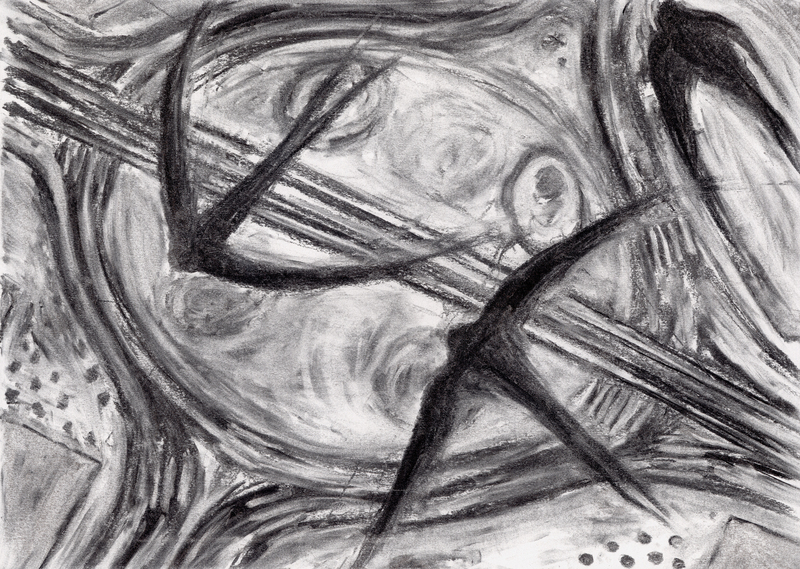 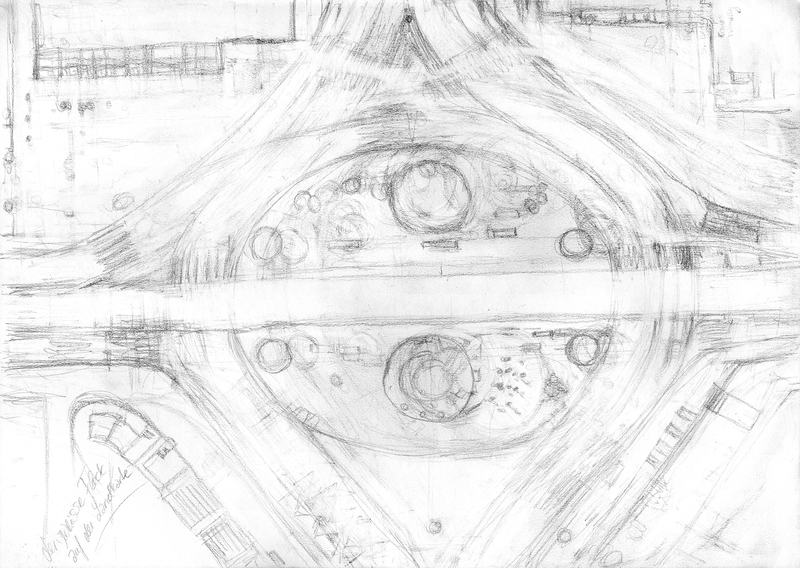 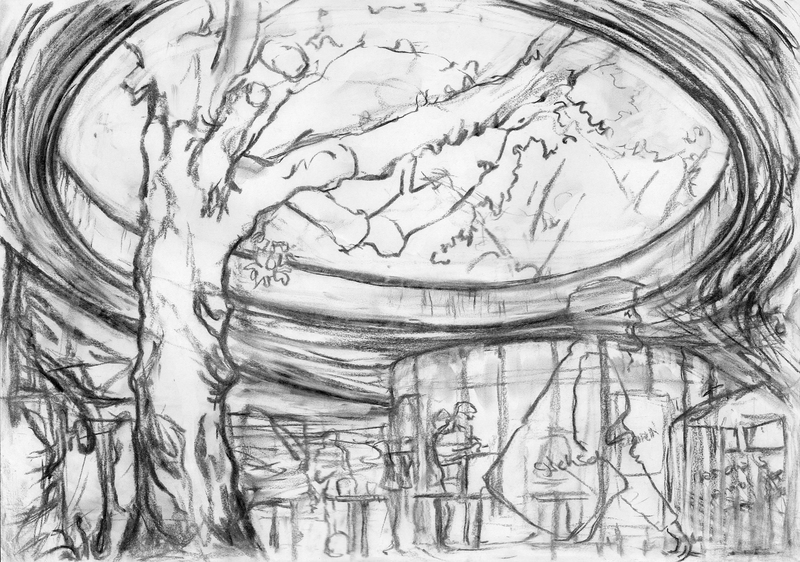 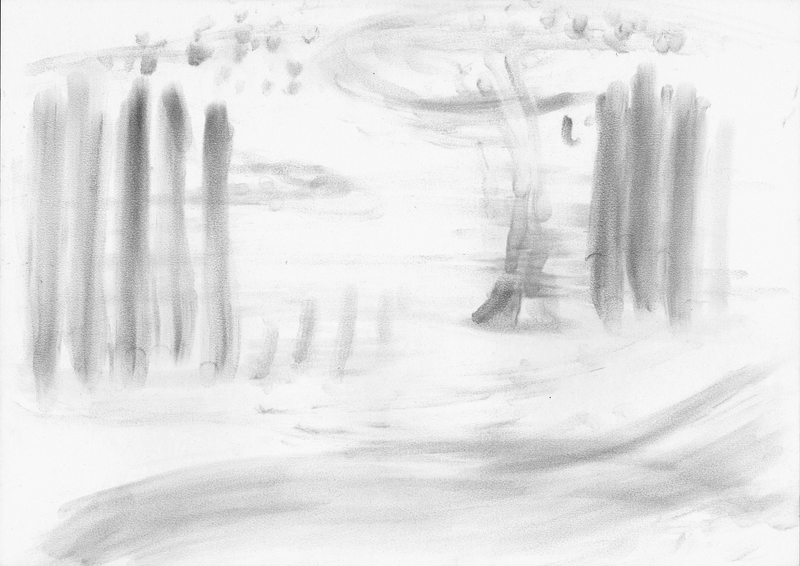 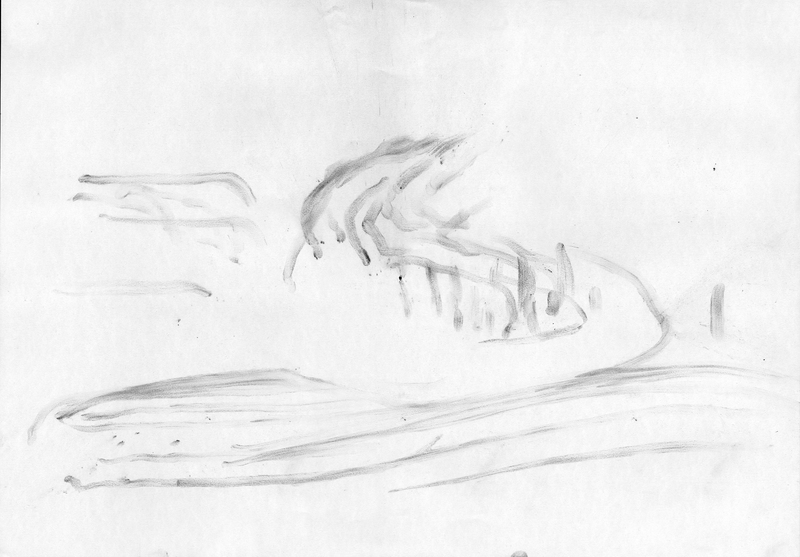 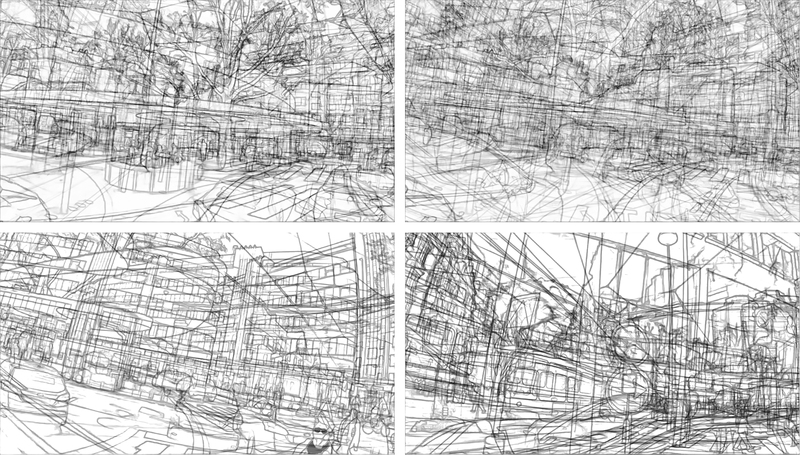 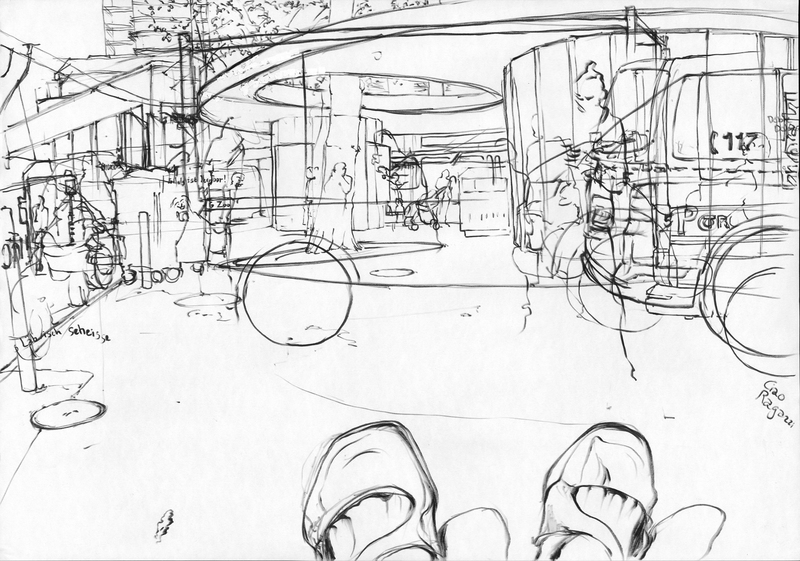 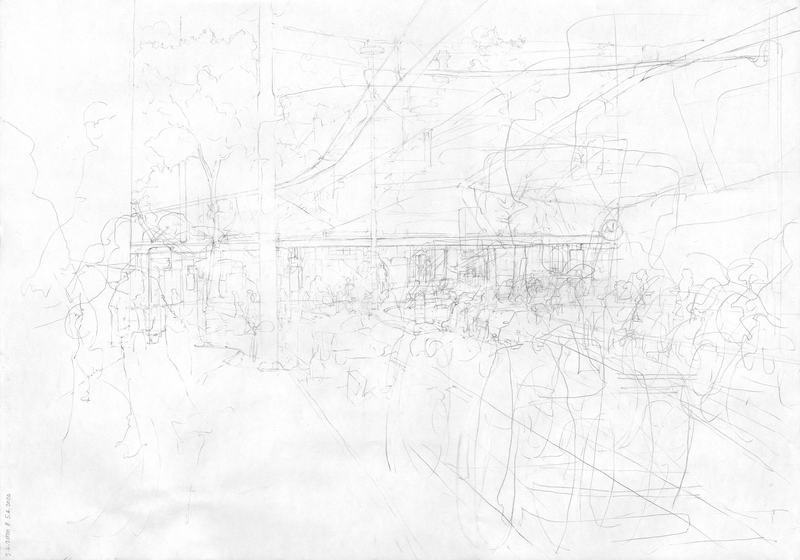